Outdoor sports, shopping and relaxation: plans to experience the magic of Christmas in Andorra

Winter is coming and with it the Christmas time, a time for family trips and plans for all ages. For those who want to fulfill their dream of spending a white Christmas, Andorra is the best destination to choose.

As December approaches, the Christmas spirit begins to emerge from everywhere. In big cities, towns and villages. Not only in the streets, shops and boutiques, but also in the mountains which are dressed in white with the arrival of the first snowfall. This makes the Pyrenees one of the most popular places for families to enjoy the festivities. Specifically, Andorra has an offer of activities and services during this time that includes high-quality shops and services, first-class gastronomy, adventure sports and extreme activities in the snow and the charm of Christmas fairs.

For this reason, every year Andorra becomes the most sought-after destination on the peninsula and by French tourists at this time of year. Not surprisingly, over the last decade the number of tourists who come to the small country has been increasing progressively from the million inhabitants it received in 2012 to the 1.5 million it received in 2018 and 2019, according to data from Statista.

This trend continued to rise until the arrival of the pandemic, as shown by the country’s hotel occupancy data. According to the “Unió Hotelera d’Andorra”, the average occupancy reached 89% this year, two points above the year, while the Andorran road network received the highest number of vehicles in the last 15 years. The Andorran ski resorts are not far behind and are the favorites of the entire Iberian Peninsula at Christmas. As a result, the country concentrates 63% of bookings on Christmas dates, above the 16.5% of the Aragonese Pyrenees and the 11.7% of the Catalan Pyrenees. But what makes it so special? What activities are a must-see in Andorra if you go in December or January?

The country is the perfect symbiosis Christmas tradition, high-quality services and the best outdoor adventure sports. First of all, families come to Andorra la Vella enchanted by the Poblet de Nadal (the Christmas Village). This Christmas fair, located in the center of the city, is the best way to discover the country’s crafts, gastronomy and the wide range of shops.

A commercial proposal made up of wooden houses that sell all kinds of Christmas products, accompanied by Christmas carols and adorned with an endearing Christmas lighting in its cobbled streets. In addition, Poblet de Nadal is also popular for hosting all kinds of Christmas shows, and for having a slide and a skating rink for the youngest members of the family. If you choose Andorra to spend Christmas Eve, meeting Santa Claus in the town of Canillo is one of the experiences that the little ones will not want to miss.

More and more people visit Andorra La Vella and stop at the Caldea urban spa. One of the best experiences is in winter, when you can relax in the outdoor Jacuzzi while snowflakes fall. A popular option, especially after a day skiing, shopping in the city or snowshoeing. Fear not for the lack of snow, as Andorra is located in the axial Pyrenees, an enclave that is always dyed white in winter.

If you are one of those who needs adventure also at Christmas, Andorra will not disappoint you. Beyond the usual snow sports that are successful in ski resorts, the Andorran mountains offer a privileged environment for practicing extreme sports and exclusive activities. It is the best option to enjoy the snow without having to ski or snowboard.

For this, at RocRoi we have a center located in the Moretó Forest, in the Grau-Roig sector, at the bottom of Grandvalira, and another in Ordino, at the entrance to the Arcalís sector. The center opens on the 26th of November and, from here, motorcycle rides, mushing, which is a sleding activity pulled by a team of very affectionate huskies, building igloos, as well as snowshoe excursions, among other activities. If you are looking for a different experience as a couple or with the whole family, don’t forget that sleigh rides and snowmobile rides can also be done at night on the ski slopes of Grandvalira. And stop at a restaurant in the middle of mountain to recharge your batteries.

In fact, these experiences are especially popular with families during the Christmas season. For this reason, joint offers that combine sporting experiences in the heart of nature with quality gastronomic services are becoming increasingly highlighted. Even more so in the case of Andorra, which has a rich culinary offer through its characteristic “bordas” or cabins lost in the forest, where families usually spend a few days, and with Michelin-starred restaurants such as Hideki Matsuhisa’s Koy Hermitage. 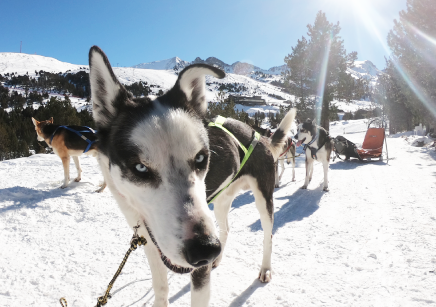