What is RocRoi and who is behind it

The Rabaneda brothers, Carlos and Lluís, natives of the Lleida Pyrenees, see the Noguera Pallaresa river as an increasingly important source of fun.

Until the day comes when, almost without realizing it, they become professional kayakers and begin to experience adventures in more and more parts of the world.

One day, back in the 90s, they wonder if they could make their passion for nature, adventure and the pleasure of enjoying the outdoors as they did, their business.

And so, in Llavorsí, the small town through which the Noguera Pallaresa runs (their river «since forever ago»), RocRoi was born in the spring of 1996.

Adventure activities such as kayaking (of course!), Rafting, hiking or mountain biking were the first, all of them from the heart of the High Pyrenées Natural Park, in Llavorsí. From the roots.

The key to understanding the leap that RocRoi took is in how the brothers conceived those experiences. Rather than just having a good time outdoors, they always tried to make adventurers aware of their own ideals:

And so it was, with that philosophy applied to its own experiences, with which RocRoi expanded its network of centers, going from one to four in national territory and opening two international ones, in Argentina and Greenland.

And what is RocRoi today?

Nowadays, over 25 years since that idea came to be, RocRoi is a name that’s inevitably related to adventure sports in our country, being a benchmark even outside our borders.

What started with two brothers is now an enterprise of more than 50 people, experts and guides, who share the principles of the company and enjoy the experiences as much as the adventurers who dare to try them in any of the RocRoi centers. .

Quality outdoor adventures on the river, on a lake, in the sea or in the snow; for families, couples, groups of friends, co-workers or end-of-year experiences in schools; for specific activities or for summer camps and campuses; for national or international clients; In any way, the philosophy will always be the same.

Because the excellence of the materials and facilities, the evolution to adapt to the current times, the interest in constantly improving ... all this has also been important to get here, but the entire RocRoi family knows perfectly well that the authentic reason has been not to forget why Carlos and Lluís decided to take the first step in 1996.

Will you join us in the next one?

Photo of the week 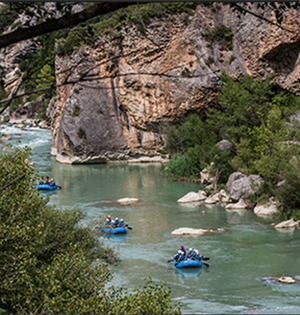